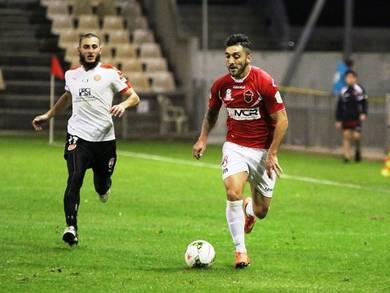 Despite being reduced to ten men midway through the first half, Rockdale managed to score right on the stroke of half-time courtesy of Hristijan Tanoski before completing the unlikely victory when Alec Urosevski and Aleks Canak hit the back of the net in the dying stages.

It was an entertaining opening to the game and on eight minutes the Wolves had their first chance when Brett Wilson mishit the ball as Rockdale struggled to clear their lines.

The visitors were awarded a free kick just outside the area in the 11th minute but Tanoski’s curling free kick was eventually saved by Wolves goalkeeper, Justin Pasfield.

Five minutes later the home side went on the counter attack with striker Josh MacDonald able to beat multiple players but his final pass let him down as the ball was cleared for a throw in.

Arguably Rockdale should have opened the scoring in the 19th minute when a cross found Canak unmarked but he could only head the ball straight at the goalkeeper.

It was Josh MacDonald who looked the most likely to break the game open for the Wolves and in the 24th minute he beat defenders left and right once again.

Unfortunately, his cut back was intercepted by a perfectly timed foot from the Rockdale defender which prevented Nicholas Bernal from burying it into the back of the net.

The visitors pressed up the field in the 29th minute and when Toufic Alameddine received the ball just outside the area on the right side of the box he sprayed his shot across goal.

A brain snap from Steven Hesketh cost him an early shower as the defender tussled with Josh Macdonald.

Right on the stroke of half-time, Rockdale City had the chance to take the lead but their long range effort only forced Justin Pasfield into a smart save.

A free-kick moments later wasn’t cleared and after some chaos in the six-yard box, Tanoski poked it home to give them the 1-0 lead at the break.

The first real chance of the second half fell to the home side when striker Nicholas Bernal rose highest for the header but could only guide his headed shot directly at the goalkeeper.

While the first half was end to end, the first 20 minutes of the second half was more subdued as Rockdale City chose to sit back and defend their slender lead.

With ten minutes remaining the visitors nearly stretched their lead to two when Alec Urosevski broke away from his defender and shot low and hard at goal but the Wolves goalkeeper was up to the task.

However, four minutes later Urosevski did get his goal when he put the ball into the back of the net to give the visitors a 2-0 lead.

With the game in its penultimate stages the away team Aleksandar Canak volleyed home the ball to ensure that Rockdale took all three points.

Rockdale City Player-coach, Paul Reid, was ecstatic with the performance and was proud of the character shown by his side.

“It was one of the best performances from us this season,” he said.

“ We went a man down but before that we were the better team. I came over to the bench and said we would play three at the back because we’re not going to sit back and go for a draw.

“In the end we got the goal right before half time which was a great and in the second they (Wollongong) didn’t even create a clear cut chance despite having the man advantage.”

Wollongong Wolves head coach, Jacob Timpano was left frustrated after another match where his side struggled after the opposition had a player sent off.

“We’ve shown in previous games a send off for the opposition doesn’t really help us. History’s shown we haven’t played well against ten men and we didn’t again tonight,” he said.

“I think the biggest difference today was experience. They’ve got experience all over the park and as a club our philosophy is not to go spend big money. The proof is in the pudding in a game like today.”

Wollongong Wolves are back on the road next weekend when they travel to Blacktown Football Park to face Blacktown Spartans while Rockdale City Suns FC have a tough away trip to Sydney United Sports Centre to face Sydney United 58 FC.